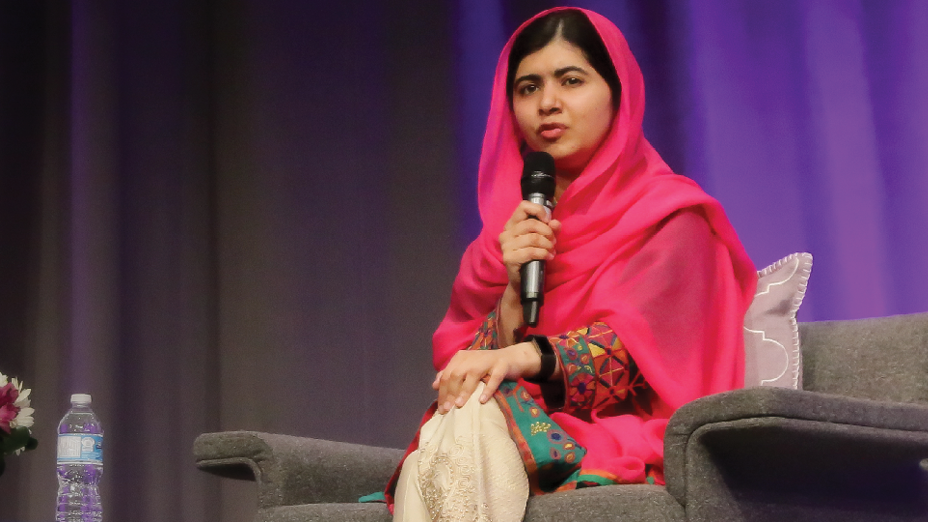 Malala Yousafzai is many things. The survivor of a Taliban assassination attempt. An activist for female rights and education. She is a fighter and a crusader for justice. But Malala is also a leader, despite her young age. Her mission is to remind us that leadership is about the willingness to speak for yourself and for others. Malala believes in the magic that happens when you believe in yourself and the magic of your voice. Though this magic, she says, women will feel empowered. She speaks of the need for women to not become complacent. She wants them to become leaders themselves. She also wants women to appreciate and celebrate what we have in common. “We realize the importance of our voices only when we are silenced.” It’s a potent message. Malala Yousafzai is a leader with the courage and determination to change the world.

"I don't want revenge on the Taliban, I want education for sons and daughters of the Taliban." - Malala Yousafzai

Malala grew up in the Swat Valley in northwest Pakistan. Malala’s father, Ziauddin Yousafzai, was a passionate education advocate who helped run a learning institution in the city. School and education played a big role in Malala’s early life. In 2007, when Malala was ten years old, the situation in the Swat Valley changed. The Taliban moved into the area and quickly became the dominant voice throughout much of northwestern Pakistan. Girls were banned from attending school, and cultural activities like dancing and watching television became verboten. Suicide attacks were widespread, and the Taliban made its opposition to female education a cornerstone of its terror campaign. By the end of 2008, the Taliban had destroyed some 400 schools. But this never stopped Malala from speaking out for the rights of girls and women, not just in her home country of Pakistan but across the globe. Malala believed, “If one man can destroy everything, why can't one girl change it?” Even at such an incredibly young age, Malala refused to let the Taliban stifle her courage. “There was fear, but I never let that fear overcome my courage. I let my courage win,” she says.

To bring about change, leaders instinctively understand they can’t wait for change to happen. To make change they have to make it happen themselves. Malala was determined to go to school. She believed in her right to an education. She openly criticized the Taliban on Pakistani TV, calling them out for taking away her basic right to an education. In early 2009, Malala started to blog anonymously. At 11 years of age, she began to write for the BBC in a diary describing her life and being afraid to go to school. Even now Malala says, “Let us pick up our books and our pens, they are the most powerful weapons.”

That same year, Malala was forced to leave her home and seek safety hundreds of miles away. Upon her return to Swat, she continued her public campaign for her right to go to school. As her voice grew louder, her magic as a leader became more powerful. Word spread about Malala and her father. They became known throughout Pakistan for their determination and insistence that Pakistani girls get immediate access to a free quality education. She was nominated for the International Children’s Peace Prize in 2011. That same year, she was awarded Pakistan’s National Youth Peace Prize. With her growing activism, it was just a question of time before the Taliban showed their hand.

In 2012, on a bus with her friends, having finished school exams, Malala was shot in the head, the target in an assassination attempt by the Taliban. Malala survived the attack and was airlifted to Birmingham in Great Britain for care and rehabilitation. Throughout her ordeal, Malala insisted that conflict and violence were not the answer. Said Malala, “I don't want revenge on the Taliban, I want education for sons and daughters of the Taliban.” Malala didn’t want to be thought of as the girl who was shot by the Taliban, she wanted to the world to see her as the girl who fought for education. Instead of stopping her, she became even more determined to make her life’s work helping girls and women empower their lives through education and equality.

Malala spoke at the United Nations on her 16th Birthday, calling for education accessibility. “I told myself, Malala, you have already faced death. This is your second life. Don't be afraid - if you are afraid, you can't move forward.” Although she was only a teenager, Malala showed the world what leadership really means. Leadership isn't about titles, recognition or corporate power. Leadership is about standing up for positive change. It’s about taking risks, even in the face of fear. Leadership is about doing the right thing. Malala showed the world that leaders need to be brave and that the brave are the people who fight for what is fair without limitations.

Later that year, she published her first book, an autobiography entitled “I Am Malala: The Girl Who Stood Up for Education and Was Shot by the Taliban” and won the prestigious Sakharov Prize for Freedom of Thought. In 2014, Malala and her father co-founded the Malala Fund, an organization that, through education, empowers girls to achieve their potential and become confident and strong leaders in their own countries.

Today, Malala continues to use her leader’s voice to advocate for girls and women’s rights. With more than 130 million girls out of school, Malala continues to work her magic. She travels far and wide getting the message out there as she fights poverty, wars, child marriage, and gender discrimination to go to school. “There are two powers in the world; one is the sword and the other is the pen. There is a third power stronger than both, that of women.” Malala is one leader who is making sure that their stories, like hers, continue to be heard around the world.

Simply put, Alan Roger Mulally is the Bruce Springsteen of CEOs - the consummate frontman. For 37 successful years, he was the Executive Vice President of Boeing... Read More ›