The Art or Science of Business

Volume 2 Letter From the Editor:

There has been much debate on whether success in business is more art or science or a bit of both.  Clearly, today’s most successful businesses are blurring the lines between the two. They require imagination, creativity, mathematics, observations, perceptions, perspectives, communication, discovery, experimentation, perseverance, connections and personal meaning.  They begin with a creative process, followed by an efficient technique, even though ‘artists’ are stereotypically creative, and scientists are stereotypically efficient it is the balance of the two which are at the heart of the business success formula.

Apple is an extraordinary example of a company that is both highly artistic and scientific.  According to the late Steve Jobs, the most enduring innovations marry art and science.  He had pointed out that the biggest difference between Apple and all the other computer companies is that Apple always made a conscious effort to combine art and science.  The original team working on the Mac had backgrounds in anthropology, art, history, and poetry.  That’s always been important in making Apple’s products stand out.  It’s the difference between the iPad and every other tablet computer that came before it or since.  It is the look and feel of a product.  But it is such a difficult thing for scientists or engineers to see that importance, so in order for any company to succeed they must have a leader that sees the importance of both art and science and know how to bring them together.

In our spring issue, Eric Ryan (Co-Founder of Method) discussed why he believes it is important for companies to invest more money in design and less in strategy.  He noted that The London School of Business found that on average, every $1 spent on design yielded a $3 ROI.  Understanding ROI from design is challenging because great design has an emotional impact on consumers that is inherently hard to measure.

Although arguments can be made for both art and science it seems that, at high levels, art becomes more scientific and science, more artistic. It's at the low levels of both that we are most often exposed to, that makes us think that the two are shockingly different.

We, at The Art Of believe in providing our community with a cross-section of thought leaders and subject matter experts who strike a balance between the artistic and scientific approaches to business today. 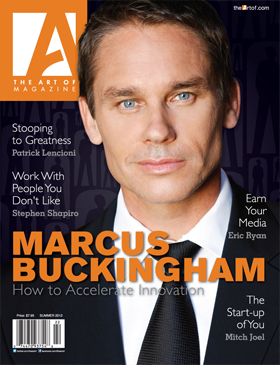