The Art of The Brick 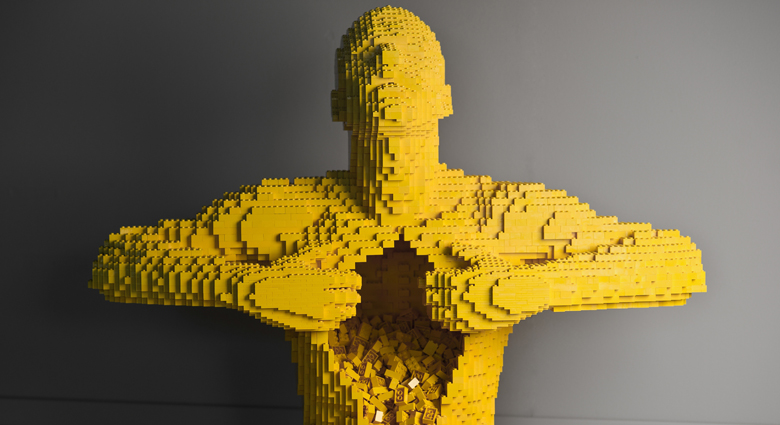 “What do you want to do for a living?”

All of us grapple with who we have become. The work that we do defines us.

As a parent, this is the question that we most fantasize about. As an adult, this is the question that we often reflect on when work gets tedious or we’re simply ready for a change. On a recent flight, I was watching the science fiction movie, Interstellar. There’s a part in the movie (don’t worry, this is not a spoiler alert) when one of the characters says that once we become parents, our role changes, and all that we are is the memory of our children. All of us grapple with who we have become. The work that we do defines us. We attend events put on by The Art of Productions, because we continually want to do, think and be more in our lives. Over the years, work has become much more than the place that we go to earn living. Work has become the place that we go to, because we’re hoping to be contributing to the world… and not wasting our time or clock-watching.

Imagine, if your recently-graduated-from-University child said to you that they wanted to build things with LEGO for a living.

I can’t remember when I first heard of Nathan Sawaya, but I knew his work long before I knew the artist’s name. It was a large sculpture. It was all yellow. It was a human torso that was tearing its chest apart, spilling the insides out on to the table that the sculpture was sitting on. It was all made of traditional yellow LEGO bricks. That sculpture stopped me dead in my tracks. It was very evocative… almost disturbing. Still, it was made of LEGO. Those clickable bricks that little kids play with. Those little bricks that get jammed into our feet at two in the morning when we’re trying to get a glass of water from the kitchen. Was someone making a joke? Was this serious art? A great piece of art does this. It moves you. Emotionally. Physically. It gets you thinking. After you experience it, you can’t stop thinking about it. Delving online to discover who had created this piece - and if there was any more where that one had come from - you discover Nathan Sawaya. Sawaya was a corporate attorney in New York City, until he decided to leave that life to become a full-time artist working with LEGO bricks as his medium.

“It has been over ten years since I left the law firm to become a full-time artist,” said Sawaya during a recent conversation from his studio in New York City (he has a second studio in Los Angeles). “LEGO is extremely popular and an important part of culture these days. When I first started doing this, LEGO was not as popular as it is now. Back then, I would get emails from people who were very interested in doing what I do. Now, the idea of becoming a LEGO artist is not that far-fetched. A lot of people are out there, using their bricks and supporting themselves professionally with a business that is LEGO-based in some way. Don’t kid yourself, it has taken a while for the art world to really accept the idea of LEGO as an art medium, but now those same skeptical galleries are knocking on my door.”

Sawaya had LEGO as a child (like most of us did). It was something that was always with him. He would tinker with the connecting bricks in an attempt to mold their square shapes into the images that he had in his mind’s eye. This child-like sense of wonder and discovery is something that never left him. He would hide bricks under his bed in college. At one point, he wondered if he could do a large scale object out of LEGO. If he could build a pencil out of LEGO, he began to wonder if he could  make one that is eight feet tall. With that, his art began to change towards themes, emotions and, eventually, the human form.

A great piece of art does this. It moves you. Emotionally. Physically. It gets you thinking.

While Sawaya has a relationship with the LEGO company, he is not employed by them. Like you and I, he purchases all of his bricks. The difference, of course, is that he purchases pieces by the hundreds of thousands, and he stocks his studios with millions of pieces so that his work can get done. All of the pieces in all of his works are regular pieces of LEGO that anyone can buy in any LEGO store. Sawaya is officially recognized by LEGO, and is the only person ever to be certified as a LEGO Master Builder and LEGO Certified Professional (yes, those are both real designations and serious designations that bring with it lots of employment opportunities). Over the years, he has created a lot of highly recognizable pieces including a seven-foot long replica of the Brooklyn Bridge, a life-size t-rex dinosaur, a six-foot-tall Han Solo frozen in carbonite (for the Star Wars nerds) and, most recently, those cute little Oscar awards that were made out of LEGO for the annual event. His exhibition, The Art of the Brick, continues to tour the world and he has published two bestselling books. In short, he takes this toy very seriously.

“When I discovered that creating art out of LEGO bricks was going to be my career, I decided that I wanted to take on sculptures that would really inspire people… and move me in creating them,” said Sawaya who is known to think about art elements in his work like spatial perfection and complex concepts. “I have to tip my hat to those folks in Denmark. They have made this product that the world loves. Not just kids. It is very multi-functional. The possibilities are endless. My art studio has over four million bricks in it. It allows me to explore when I have an idea, but I do want to push the envelope and come up with something different. The goal of any artist is to captivate your viewer for as long as you can. You want people to sit and view your piece - or even think about it - for longer than it took you, as the artist, to create it. In my case, this means weeks and months, so I’ll see what I can do to make that happen. Even with that pressure, I am so profoundly thankful that this is the work that I get to do.”

Now that you know Nathan Sawaya’s story, let’s ask the question again: what do you want do for a living?