Don Draper Is No Longer In Charge 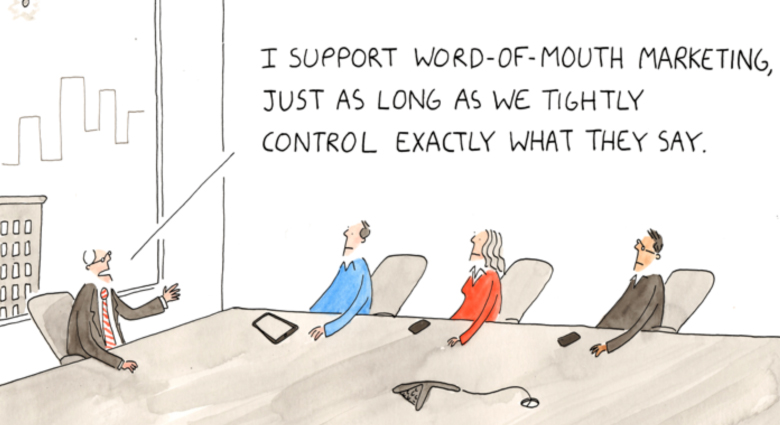 Marketers all want to generate word-of-mouth. But we sometimes forget that this inherently means giving up control.  We need to remember that advocates are every bit a part of the marketing team as the marketers themselves.

"With new marketing channels and the rise of empowered consumers, command-and-control marketing is over."

Recently, the Nutella brand discovered a Nutella superfan named Sara Rosso.  On her own, Sara started World Nutella Day.  She shared Nutella recipes, wrote stories, and posted fan photos.  Over a few years, she built up an audience of 40,000 like-minded Nutella aficionados on Facebook.  She was basically doing the content marketing job on behalf of Nutella, yet she wasn't on the payroll.

How did Nutella respond when they discovered Sara Rosso, content marketer extraordinaire?  They sent her a cease-and-desist letter.

Eventually, Ferraro (maker of Nutella) backed down.  But their knee-jerk reaction reflects the command-and-control mindset that drives most forms of marketing.  It is time for marketers to recognize that brand owners never really own the brand. Our customers do.

Marketers are traditionally trained to repeat our single-minded proposition over and over until consumers buy whatever it is that we're marketing.  In an effort to get our features and benefits across, we often lose sight of what's actually valuable to our audience.  Great marketing turns the mirror on the audience.

One of my first marketing roles was with Green Giant, a top advertising icon of the 20th century.  When I joined the brand team, I found a brand brief literally written by a young Leo Burnett.  In the early days of marketing, brands were crafted by men like Leo Burnett and Don Draper.  Every point of brand communication was carefully scripted and controlled.

But with the explosion of marketing channels and the rise of empowered consumers, command-and-control marketing is over.  Don Draper is no longer in charge.  We can’t script the creative force of brand advocacy, but we can channel it.

"Rather than command and control, our job as marketers is to inspire and amplify."

The Philippines recently developed a marketing campaign that gave up control of the message to its fans.  To increase tourism, they decided not to simply generate content about the region themselves, as most visitor bureaus do.  Instead, they created a simple app called “more fun in the Philippines.”  The app allowed anyone to upload any picture and write any message about what they found “more fun in the Philippines”.  The app then generated a single shareable image that combined the picture, text, and name of the contributor.

The more provocative submission was a cockfighting photo and the tagline, “Angry Birds. More fun in the Philippines”.  The tourism department of the Philippines certainly wouldn’t endorse cockfighting, but they allowed even that communication.  As a result of handing over the content marketing reins to their audience, visitors increased to the Philippines by 16%.

Rather than command and control, our job as marketers is to inspire and amplify.

Marketers love chasing the shiny new thing. It seems like every week, we learn about a new technology, social network, or media platform that promises... Read More ›

Is Your Brand Creepy?

Retargeting has taken the advertising world by storm. No longer do advertisers have to hope that an audience they want will be found at a particular... Read More ›

Social media allows brands to start conversations, but are they conversations worth starting? It seems like nearly every ad closes with an invitation... Read More ›