“The purpose of marketing is to deliver business results,” says Arlene Dickinson, renowned CBC “Dragon” and one of Canada’s most successful communications entrepreneurs. Whether explaining how to leverage marketing in even the toughest of economic times, sharing backstage stories from “The Den,” or giving audiences a look into her personal story of success, Dickinson’s experience and expertise always shines through.

Dickinson is a serial entrepreneur and General Partner of District Ventures Capital, a venture capital fund focused on helping market, fund and grow entrepreneurs and their companies, in the food and health space. Best known to Canadians as a star of CBC’s award-winning series Dragons’ Den for over 12 seasons, Dickinson is also a podcaster, renowned speaker, and the author of three bestselling books: Persuasion, All In, and her most recent, Reinvention.

Dickinson’s success and leadership has been recognized with multiple honours and awards, including Canada’s Most Powerful Women Top 100 Hall of Fame and the Pinnacle Award for Entrepreneurial Excellence. She is also an inductee in the Marketing Hall of Legends, and has been honoured with PROFIT and Chatelaine magazine's TOP 100 Women Business Owners Awards. In 2012, Dickinson was awarded the Queen Elizabeth II Diamond Jubilee medal.

Dickinson is an honourary captain of the Royal Canadian Navy and the recipient of four honourary degrees from Mount Saint Vincent University, Concordia University, Saint Mary’s University, and NAIT. She also sits on several public and private boards and is actively involved in supporting her community and country. 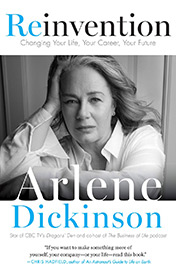 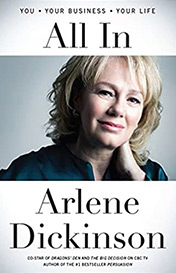 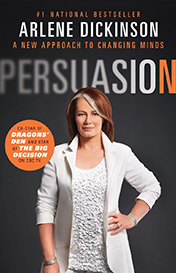