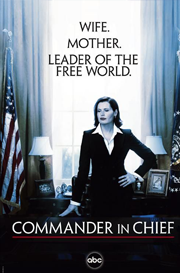 Mackenzie Allen, the 45-year-old Independent Vice President of the United States, is about to venture into territory no woman has entered before. While at an official ceremony with husband and Chief of Staff, Rod Calloway, she is informed by the President's Chief of Staff, Jim Gardner, and the Attorney General that President Bridges is about to undergo emergency brain surgery for a tumor. Mackenzie is stunned when Gardner tells her that in the event the President does not recover, the party doesn't want her to succeed him. Instead, she's asked to step down in order to allow the Speaker of the House to assume the post, as he shares the party's ideals. Mackenzie's doubts are confirmed when she visits President Bridges at the hospital and hears from him directly that he wants her to resign. Bridges dies before transition plans are finalized, however, and after sitting through an insulting and sexist conversation with Speaker of the House, Nathan Templeton, Mackenzie decides to forge ahead and assume the presidency despite the obstacles that lie ahead. Aside from the challenges Mackenzie faces, husband Rod has his own hurdles to overcome, as he finds himself being ushered into a pink and feminine office by the first lady's aide. Her children, six-year-old Amy, as well as twins Horace, one of the most popular kids in school, and Rebecca, a rebellious teenager with raging hormones, must also learn to deal with their mother's new role of the leader of the free world. Meeting with a saddened Congress and addressing a stunned nation, Mackenzie delivers an inaugural speech with the help of press secretary Kelly Ludlow, which manages to unite a grieving country, quell the critics who feel she's not up to the task, and look to the bright future which lies ahead, led by the first female President of the United States.

Have you read Commander in Chief ? What did you think?