Conference Summary: The Art of Leadership for Women - Toronto 2016 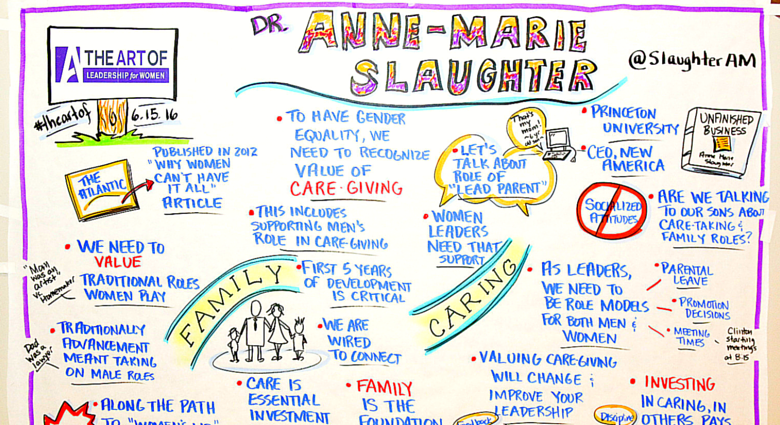 On June 15th, 2016 The Art of Leadership for Women came to Toronto featuring six internationally renowned bestselling authors and thought leaders. Here are the key takeaways from each speaker and their visual summaries drawn by Carolyn Ellis.

You cannot assume people know what you mean – you have to work at it.

The day began with social psychologist and bestselling author, Dr. Heidi Grant Halvorson. In her presentation, she spoke about the discrepancy between who we think we are and how people perceive us. While we may be aware of our intentions and feelings, the message is often lost in interpretation. Interpretations of our message are affected by things like our actual words and actions, stereotypes and assumptions, past experiences with you, stuff about them, and context.

So what can we do about that? Dr. Halvorson introduced the three lenses of perception: trust, power and ego . To gain trust, she suggested using her competence and warmth model where competence is your ability to help and warmth is your willingness to do so.  She provided some excellent tips to demonstrate warmth, including eye contact, nodding, empathy, keeping promises and being affirming. One way to gauge how people perceive you is to ask them to fill in the blank: “If I didn’t know you so well, I would think that you were ____” and then ask them why. She then addresses the power lens. To get the attention of powerful people, Dr. Halvorson suggested not relying on flattery because that doesn’t work, nor does doing a great job at your work because that’s what is expected. Power makes people focus on their own goals and ignore those around them, so instead, always be asking “how can I help YOU”. Finally, she addressed ego. She informed us that in our competitive environment, our success bothers those around us whether they know it or not. To help with this, she offered her relevance and closeness model (how related is their success to you, and how much better than you are they?). To those in “high threat” quadrants she suggested decreasing your closeness or creating a sense of “us” and celebrating each other’s wins. 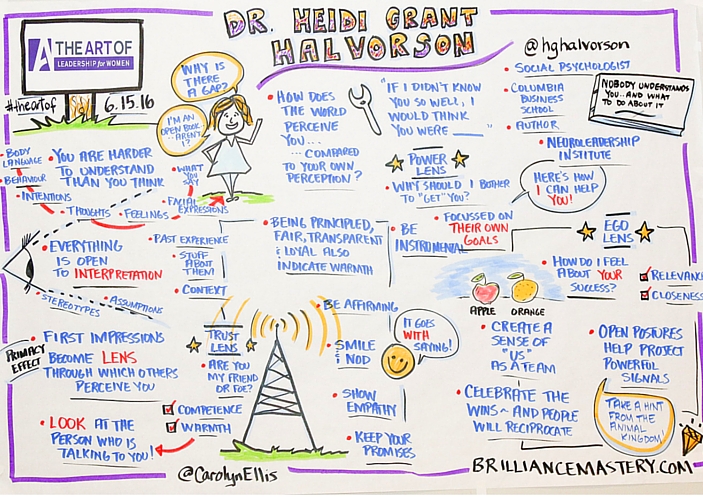 Go from reflex to reflect.

Our next speaker, Tammy Heermann, asked if drowning in execution is blocking you from being strategic. Often, women are not given credit for being strategic because they tend to work collaboratively and revealed some great studies demonstrating that, while women can rotate six ideas at one time on average and men only two and a half, men are better at being strategic.

One technique that Tammy suggested for being strategic is to ask strategic questions. Questions aren't just about getting information for us; they show others how we think, so by using them wisely we have the opportunity to change perceptions. The three types of questions to show strategic breadth are connection, impact and tension.

Her key advice for being strategic also included not using buzzwords and avoiding expressing opinions at work. Instead, share your point of view – opinions are judgements formed about something and not necessarily fact or knowledge, whereas point of view is a position or perspective from which something is considered or valued. Other tips Tammy offered for demonstrating strategic thinking included: making it about the customer, linking to broader goals, quantifying with numbers, projecting a future focus, and showing where and how to win. According to Tammy, you need three strategic networks: operational, future focused (what are the experts saying?) and careers (who’s got your back and pulling you through the organization?). 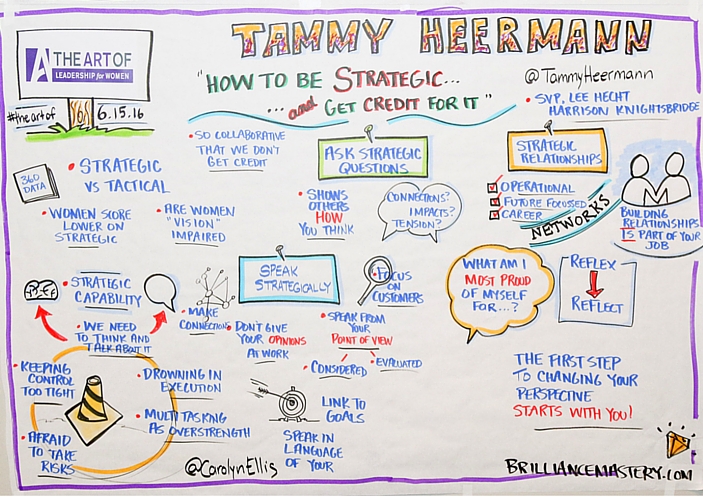 There is no substitute for hard work.

After the networking break where attendees had book-signing opportunities with speakers and explored what the exhibitors had to offer, senior executives took the stage for a relatable conversation from some everyday leaders. Panelists included Shelly Ng the VP of Product Management at Ceridian, Vanessa Iarocci the Associate Vice President at TD Wealth, Cheryl Stargratt the Chief People Officer at Tangerine, and Rebecca Mooney the Vice president and Head of Brand and Marketing at RBC Wealth Management.

The conversation was around the unique role of women’s leadership and addressed some key issues and trends facing women in business. Topics covered by the panel included unconscious biases to empowerment, role models, networks and mentorship, and personal branding. The panel provided some female-specific tips and suggestions for successful leadership and climbing the career ladder. 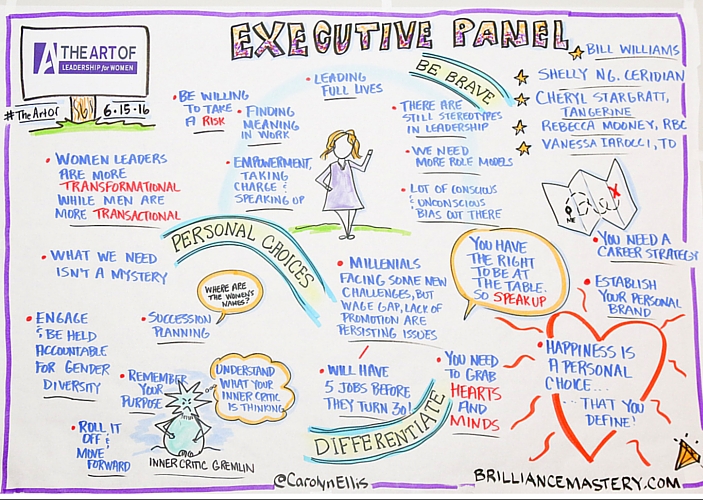 Be ready for anything because you never know what’s next.

Kirstine Stewart is the Vice President of Media North America at Twitter, the bestselling author of Our Turn and she took the stage after lunch, participating in a moderated conversation about leadership with our Host, Bill Williams. “When you do things that are different, you have to be ready for the reaction”, says Kirstine. She encouraged attendees to stay connected to a team of people that you don’t just draw mentoring from, but also give back to. She also introduced a refreshing new alternative to “work-life balance” which she claims is non-existent.  She calls it “Work-Life Flow”; carving out spaces in everyday life to fit in some work. Another key takeaway is when she cautioned against taking your foot off the career accelerator out of fear of things getting harder or worse – they could get better and you actually have more flexibility the higher up you go. There was a time when women on the rise were expected to take on male attributes – now we know it’s best to be yourself. Some other key takeaways from the discussion included:

When it comes to hiring more women, Kirstine encourages companies to show inclusion but not announce it. You never want the people on your team wondering if they are there because you “checked the boxes”; they should feel that they’re there because they deserve to be.  Finally, Kirstine shared some very valuable advice on how to ask for that raise in the way that has the best chances for success. 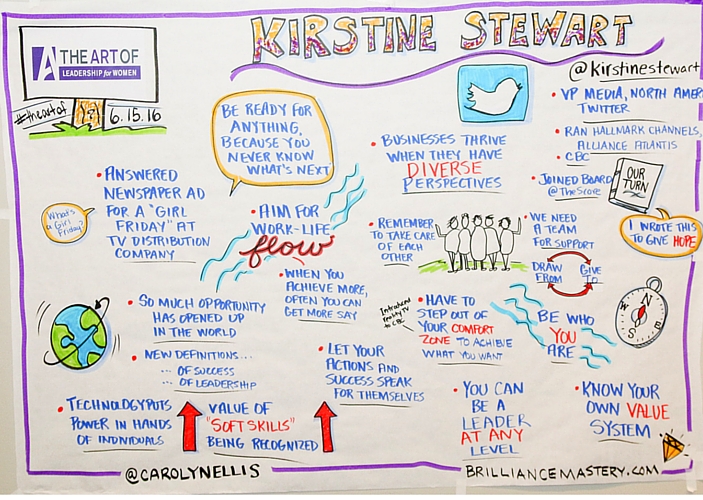 What we really have to do is value the work of care – at least as much as we value the resume.

Our next speaker, Dr. Anne-Marie Slaughter, got a standing ovation. Slaughter is the bestselling author of Unfinished Business, Professor Emerita at Princeton University, the CEO of New America and from 2009-2011 she served as the Director of Policy Planning for the U.S. Department of State – the first women to hold that position. Dr. Slaughter shared with us how she left her position of work to care for her two sons and her honesty about the reasons she abandoned her tenure got a lot of backlash – she was seen as less ambitious and less valuable. She addressed the issue of socialized roles – the work that women traditionally did (“care”) and the role of “breadwinning” as the man’s role.

While women were fighting for our place in the professional workplace, we systematically devalued the work that women traditionally did and she says that we made a mistake. We wanted to be in the work place but we don’t want to sacrifice the home life - home life is part of what makes life worth living. She emphasised that we need to put an equal value on care, however, recognizing that it’s not only the woman’s responsibility. We need to get the men in our lives involved.

Care is as important as breadwinning – it is converting that income to meals, and shelter and discipline, etc. and the most important thing we can do is invest in the first five years of the next generation. She introduced the idea of a “lead parent” and how people are much more likely to flourish with a greater support system at home. She encouraged us to look at the men who are stepping up as lead parent, support them and see them as secure and important. Men should get the same opportunities for care – parental leave, be able to move for their spouse – we need to treat men the exact same as women. We've changed the way we've raised our daughters, but we need to change socially imposed gender roles and what we teach our sons about being equal care givers. According to Dr. Slaughter, valuing care will open chances for women leaders, it changes the way we think about and treat men and the expectations of men and that’s just equality, making you a better leader and manager. 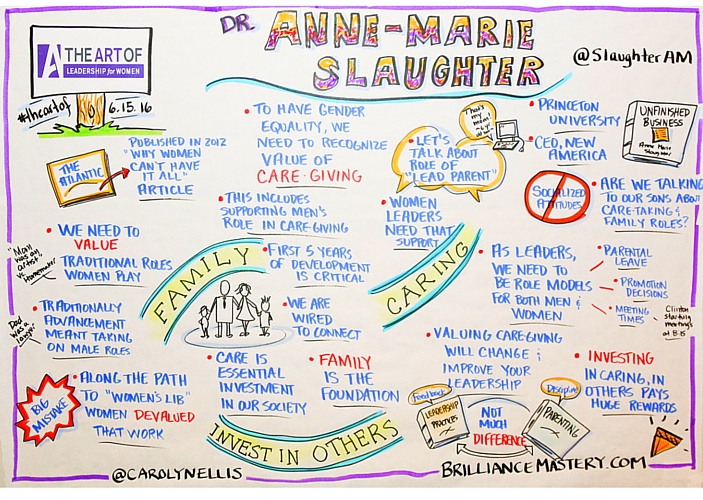 If she can see it she can be it.

Many people would have recognized our final speaker, Geena Davis, as the Academy Award-winner seen in movies like Thelma and Louise and Beetlejuice. However, Geena is also the founder and CEO of the Geena Davis Institute on Gender in Media, a research-based organization working within the media and entertainment industry to dramatically improve gender balance in children’s entertainment. Geena said she refers to herself as an actor – not an actress – and prefers to only play roles of women who are role models. She used humour to both entertain and inform the audience that, while many people advocate that gender inequality has been fixed, she and her organization have years of research to prove that it has not. According to her statistics, at our current rate it will take us 500 years to achieve parity. Some eye-opening and insightful facts about media that Geena shared included:

We have to value the work of care – at least as much as we value the resume.

According to Geena, we have been trained to see a smaller representation of women (even though we are half the population) and consider it normal. As early as eight years old, females already can recognize that they need to be attractive to men and that they need to look for romance. What we are saying in film is that women and girls are not as important as boys and men; they don’t take up half the space or half the opportunities. She says that the more time girls spend watching TV, the less opportunity she thinks she has, and the more TV that boys watch, the more sexist they become. We need to show the kids that boys and girls can share the sandbox equally. Closing the day off on an inspirational note, Geena encourages all of us to be agents of change and become impatient optimists to make gender parity happen. 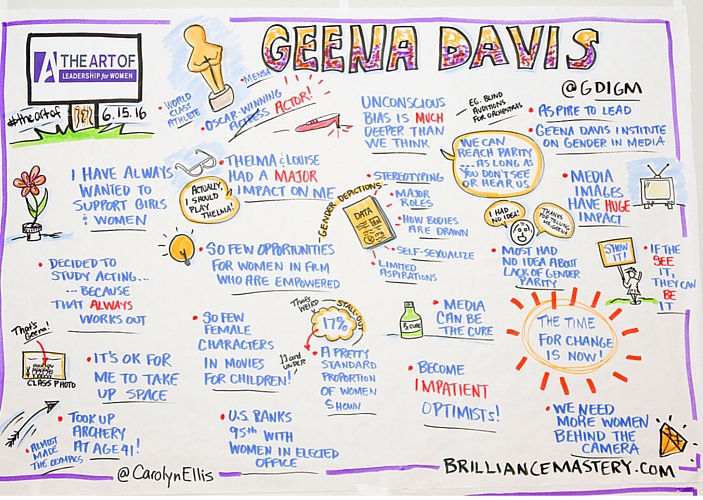